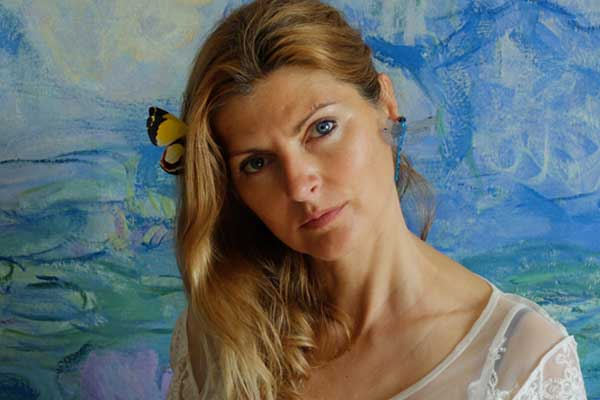 Stefania Ricci was born in 1974 in Ivrea, Italy. She has graduated at the Academy of Fine Arts in Turin in 1999. In 1998,she debuted with "Still", at the Castello di Rivara ( TO) in a solo show curated by Maria Teresa Roberto, a cycle of photos where portraits and environments are enveloped by white sheets. She takes part in several collective exhibitions in Turin, Genoa, New York ("Nursery Cryme" at the Williamsville Art & Hystorical Center), Milan, Modena,Shanghai, Nice, Paris but also looks for new inspiration, so after a workshop with the photographer George Rousse, she realizes a work dedicated to still lifes exhibited in a solo show in 2002 by Art & Arts of Turin and in 2003 by Angelo Falzone in Manheim. In 2002, she elaborates the first images in contact with blades of grass thrown on the sensitive paper- exhibited the first time in the exhibition Versus VIII - and realizes a photographic installation project, in collaboration with the town of Ivrea for the ancient city Synagogue, where he consolidates the work on nature looking for a synthesis between trace, shadow, figurative and abstract image. With the cycle of natural ensembles, that continues today, she participates in various exhibitions and is a finalist at the "Cairo Arte 2005 Prize", while in the following years the "Butterfly Collection" cycle is exhibited at Casale Monferrato and, in 2010, in Paris. Research on insects, on Chinese vases, on dioramas, on oriental carpets, on ex voto, on theaters until the recent "Star Maps" presented at MIA Fair 2016 by Rob Shazar gallery, and at Palazzo Ducale in Genoa in the same year. In 2017 he presents the Work Natural ensembles in a renewed version in a solo show at Broletto di Pavia and begins his collaboration with  the astrophysics Giuliana Conforto, who uses Stefania's images to illustrate part of his work.